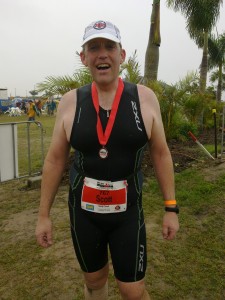 The Gold Coast Half Ironman is one of the premier Half Ironman Events in Australia. It was also my first Triathlon (nothing like starting with an easy one) and I went into it with a torn calf, which meant that every footstep was an exercise in agony. With a 1900m Swim/90km bike/21.1km Run, it was certainly interesting, even if the weather conditions on the day were absolutely appalling!

Below are a series of notes from the race!

Started at the back of the pack in my wave.

Swim, felt really good. Just over 35min by my watch which is the fastest 1900m swim I’ve done, though I felt really slow – Area for improvement. Wasn’t rotating sufficiently to the right and felt like I was working harder on the left side than the right during the swim. Right arm also felt a little tired at approx 900m. 6th in my group for the swim

Swim Transition. Took really easy, walked due to calf. Learnings in transition area. Don’t put helmet on bike as it got knocked to the ground and glasses split (though fixed) and other things were spread all over

2hrs 59min which was right on schedule.

Felt I was pushing a little hard on the first lap and was averaging 32kmh. HR was 150bpm plus which again was a little higher than I wanted.

Second lap I felt great, was laughing at the conditions and loving the experience. Slowed a little at the 80km mark as we came into a headwind. Also remember deciding at this point that I’d be finishing ‘no matter what’

Conditions were atrocious with rain (100mm fell). Spent most of time not being able to see speedo or road even though my face was inches from my speedo. Another 5kmh average here would be good. Was one bar short on my eating (from planned)

Ride Transition. Took time and strapped calf. I was a little lost where to go and should have checked this out prior to the race.

Run 2hrs 25min run time, felt very slow. Calf hurt with every step but didn’t let go on me. Felt like I was running on egg shells and didn’t let myself go faster than a shuffle at all. Foot went numb at about 5km but this fixed itself. Last 3km was really hard. Was short on food, only took 3gels for the run and really needed a 4th at the end. From a fluid perspective, I felt I drank too much and reduced fluid consumption taking drinks at every second stop from the 10km mark.

Mentally for the first half of the race I was just focussing on running without injurying myself though I was sick to death of being overtaken by everyone. (so frustration is probably the word)

Really started to struggle at the 18km mark and found myself taking more walking breaks. Mentally I just wanted it to be over.

Had massage to finish

What would I have done differently