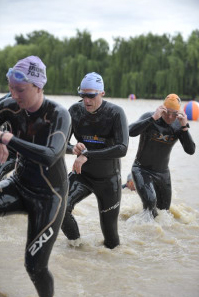 First of all, a big thankyou to everyone for their good wishes and support.

I went into this event with some very different goals to the two previous HIM’s I’d done. In both Gold Coast and Port Macquarie, I’d gone in injured and was really just looking to survive. This time though my goals leading up to the race were quite different. I’m now anxiously waiting for the Busselton Ironman registrations to open up, with a view to doing the Full Ironman in December next year.

As such my coach (Brian Rabinowitz) has advised me to start using the Half Ironman races as long training sessions rather than races. In some ways I think this is as much to settle down my pre race nerves than anything else, but it certainly does take some of the self imposed mental pressure off.

Not that my mental state has been particularly good leading up to this race. I’d done everything that I could to arrive at the race uninjured and for the most I’d succeeded well. Except that on the Thursday before the race, I was sat at my desk in the office and my left calf went into an excruciating cramp and spasm. Then every time I tried to walk on it, it locked up and cramped. So what I was anticipating as being a good weekend was turned on its head and my stress levels rose significantly.

For those that have read my previous posts, you’ll know that I’ve been here before and in some respects experience is a good thing.

So faced with this hurdle rather than giving up, I simply reset my goals.

Rather than racing to get under 6hours, I simply modified my goals taking this new challenge into account. My new goals simply read.

You’ll note that I dropped any reference to finishing any of the sessions in a particular timeframe. With experience I’ve realised that running for a particular time is impractical. Conditions vary from course to course and really HIM is more about setting a plan in place, adapting to the conditions and survival. 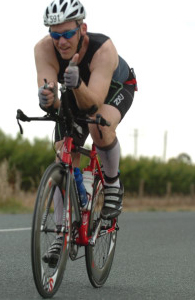 So Saturday rolled around and it was off to the Expo, at which I had an incredibly lucky break and ran into Joe Kuriel. Joe is a facebook friend of mine (though in this electronic world, I’d never met him personally), the husband of my Nutritionist, an experienced Ironman athlete himself, a Personal Trainer, a Massage Therapist and was at the event promoting a new product, Spidertech support tape. I couldn’t have asked for a better professional to meet with a dodgy calf.

Spidertech Tape is a relatively new sport’s strapping tape, used to help athletes with just the sort of issue I had with my calf. So within half an hour of arriving, I’d had a great massage and was strapped within an inch of my life. I’m always a little dubious of new products and rarely acknowledge miracles, but in this case a small miracle did take place and I suffered from no more calf pain for the whole weekend.

So onto race day (Sunday) and it was the usual dash to the start line with the pre race briefings. Surprisingly my nerves weren’t too bad and the swim warm up was excellent as it gave me a chance to get the initial panic of hitting the water under control and fix a small leak with my goggles.

At 7:08am precisely the gun went off and the aqua rugby, oops I mean swim started.

The swim was average.

The waters at Kialla Lakes were clean but extremely turbid after some very heavy rains this past week. So turbid in fact that as soon as my goggles went into the water, the lights went out. I’m used to at least being able to at least see my fingers on my goggles in murky water but this was simply impossible.

Of course having such murky water made the swim ‘interesting’. I’ve often heard (and used the same term myself) that the start of a Triathlon is a bit like playing aqua rugby. This race was no different except is was all done in the dark. I certainly took a couple of thumps, hits and kicks, however the worst part was there was no way to anticipate it coming, nor if you were about to hit anyone else. Add to this the fact that the trip around the Kialla lakes took some serious navigation and you had a recipe for an interesting swim. Luckily I only ran aground once and got tangled in one mooring buoy. (At least that is what I hope it was!)

So it was out of the water in about 36min.

Not awe inspiring but adequate and pretty much on the money for what I’d anticipated. Though as I came 85th out of 223 competitors in my age group, I’m now guessing that this was actually a pretty good swim given the conditions

Then, it was the session I was worrying about. The bike.

Given the troubles I’d had with my calf over the preceding two days I was a little nervous of this. Though with Brian’s mantra in my head ‘Control the controllable and ignore the rest’ in I was determined to give it a go.

And so began 90.1km of flat straight and seemingly unending road.

Actually the ride wasn’t that bad. I spent the first 40km or so trading places with ‘Banana Man’. I gave him this nickname as he had a banana sticking out of his tri suit!

And before you all jump to the wrong conclusions I am sure it was a banana.

I’m actually sorry I didn’t get to catch his name as we had quite a bit of fun trading places. We started with a ‘hi how are you going’ to ‘tough day for a ride’ to ‘are we really going to keep doing this all day’ to ‘God I hope not’ to ‘If we’re still doing this, this afternoon please slash my tyres’ to …

No I think you get the idea, lets just say that as the wind picked up into a 30-40kmh headwind and time wore on the conversation degenerated, 4-5 words at a time.

At least this kept it interesting.

One of the goals I’d had for the ride was not to ride to a speed, but rather to a cadence. That is the number of revolutions per minute. The theory is that if you can spin your legs faster then they don’t fatigue as easily. I’ve been stung before by pushing in too hard a gear and really paying for that with muscle cramps. I’d aimed for a cadence of 85rpm average, so I was very happy when I averaged 87rpm for the entire 3hours. (This time last year I was struggling to hold 70rpm)

And it really was for the entire 3hours.

One of the things that makes Shepparton so tough is the fact that there are no hills and when you hit a headwind (which we did) there is nowhere to hide or to rest as you roll downhill. Regardless of the conditions you just have to keep grinding away.

Overall I’m pretty happy with the way I performed off the bike. I was relatively fresh at the end and finished on 3hrs6min, which was pretty much spot on what I’d wanted and expected for the conditions

So it was onto the run. 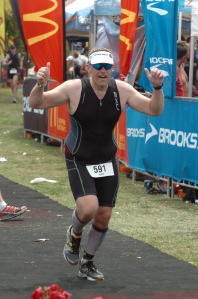 Running has never been my strong point. Given that I’m still so weighty despite losing 40kg, I’m still slow by comparison to others in my age group. That being said, I’ve certainly improved recently and the run no longer scares me.

For the most part the run was good. There was certainly a period where the thought went through my head ‘Why am I doing this to myself’, but just as quickly the answer ‘Because it is inspiring others to get off their backsides’ came. I hung onto that thought for quite a while and will perhaps be the subject of a future blog post.

Heat was certainly an issue as I’ve never been good running in hotter conditions, though the kids at the aid stations thought it was wonderful. One young enterprising lad asked me, “Do you want a splash mister?”

Of course as the temperature was 30C+ and I was 5hrs into the session, the offer was too good to turn down.

What I didn’t expect was to have a bucket of ice water thrown at me.

The kids thought it was GREAT FUN and laughed hysterically and I have to admit, it felt amazing.

Unfortunately I didn’t see them on the next loop so I had to make do with simply putting blocks of ice down the front and the back of my tri suit. It was a little noisy running along with all that ice clanking away, but hey, it kept me cool for 10minutes until I could reach the next aide station and repeat the process.

Towards the end of the run, it always gets hard. For the most part that’s when I tend to start offering encouragement to those around me. This has two effects, firstly it takes my mind of the pain, but it also does make a difference. I’ve been on the receiving end of lots of encouragement when I’ve been doing it tough and it really helps.

I love to return the favour.

I did have to sympathise with one young lady though who stopped me in my tracks. She looked like she was struggling and as I past her, I simply said, “Keep going, not far now”.

Her response was “I’ve still another lap to go, I don’t know how I’m going to do this.” So for a few moments I slowed and chatted to her, offering her encouragement. She was going through her own struggles and was making a heroic effort to get through her first HIM. She might not have been at the front, but was certainly a hero in my eyes.

And so onto the finish. I love the finish chute, that is where you are rewarded for your hard work. Family and friends are their waiting and those last 100m or so just float past.

So on reflection how did I do.

My main aim was to use Shepparton HIM as a gauge and answer the question ‘Could I go further?’ in my own mind.

The answer is a resounding YES.

Twelve months ago I got through the Gold Coast HIM and it nearly killed me.

Six months ago I did Port Macquarie HIM and spent the next 3 months in a Cam boot.

This time, I finished with heaps in the tank, using only two thirds the calories of my first race.

Could I have done another lap of the run course?

Could I have done 3 more, probably not yet, but there is still a year to go.

Looks Like I’ll be booking for the Busselton Full Ironman next year.

Let’s hope I get a place.

Reminder to self (1). Don’t have your mobile phone in the back pocket of your tri suit when you go for a recovery swim. Mobiles don’t like it!

Reminder to self (2). When you have a blister under your toenail, don’t stub your toe on a door corner and rip the toenail off. It HURTS!

Thankyou to all those that donated to VCFS!