I blame the girl in the office.

I’d been planning a 60km trail run down at Wilson’s Promontory all week. I’d even gone through the proper processes and booked a hiking permit to do the southern loop as it is relatively remote and pristine wilderness. (Wilsons Prom as it is affectionately known is a huge National Park and has lots of remote and magnificent trails to explore)

When booking in, I’d explained to the girl behind the desk at the rangers station that I was going to do the run but I wouldn’t be staying overnight. She was a little incredulous at first as most people take 2-3 nights to do the run I was proposing to do in a single day.

‘Are you experienced?’ she asked – ‘Well if it comes to bushwalking/running, I’d say yes, when it comes to other things it’s debatable.’

‘Do you realise the distances involved?’ – ‘Yes I’m anticipating about 50-60km’

‘You’re mad’ she said – No arguments there

‘Well at least take one of our park note brochures, it has all of the emergency numbers in case you break an ankle.’ – And that was it, she’d put the moz on me.

I had a great start to the run, ticking off the first half a dozen km right on my Ultra pace, feeling strong and actually enjoying myself. I’d even stopped to take a selfie.

Then whilst running down a hill at full pelt, my left foot caught a rock, rolled under and before I knew it I was rolling down the hill in a not very elegant somersault. 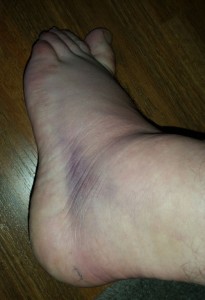 Laying on the floor, it took me a few seconds to even register what had happened. I checked everything, thankfully nothing was broken (the girl’s voodoo doll had apparently failed on that mark) but I had sprung a few leaks. (Knee, elbow, backside, lower back). And like any good athlete my first thought was whether I’d damaged my brand new backpack. (Thankfully I hadn’t)

So the next question was what to do. I was only about 7 or 8km from the start so there were two options available. Go on or return.

My first thought was to push on and to see if I could walk through the damage. My knee and elbow stung a bit but in the words of the black night from Monty Python it was just a flesh wound(s). (See link for the video I’m talking about if you haven’t seen it) After about 3km though it became readily apparent that it wasn’t going to be my day. Something about the fact that my ankle was about twice it’s normal size, I was getting shooting pains right up the back of my left leg and into my glutes started to register that I might be in trouble. Add to this that I couldn’t run at all and my walk had dropped to 15-16min per km my brain was starting to register an issue. With another 50km to go and much harder terrain, it would take me at least 15+ hours to finish even if things went well. Plus I’m sure the Police Helicopter wouldn’t appreciate having to mount a search and rescue mission for me should things go further arwy. (Pretty much the only way to rescue people from down there is via the sea or helicopter). So discretion became the better part of valour and I turned around.

The prom would have to wait. And in hindsight I’m VERY glad I did, the walk back took 2.5hrs even with the support of poles and judging by the size of my ankle and the bruising, it’s been pretty badly sprained. Having said that, a couple of days later there doesn’t seem to be any major damage outside of the swelling, so if the Trail Gods are good to me, it shouldn’t put my training back too far.

The North Face 100 is another story though, the Prom run was to be my test to make sure I could keep the pace and make the cutoffs in a couple of weeks time. Now I’m not sure, but let’s see what tomorrow brings.